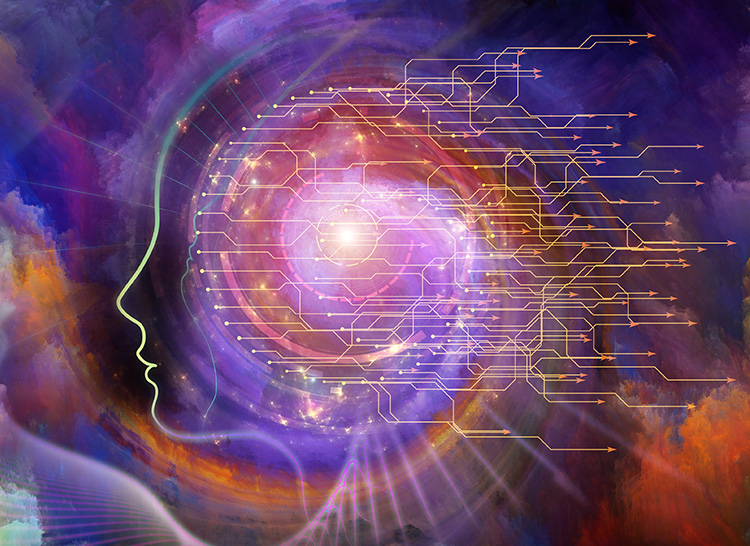 Often called TMS, or rTMS (repetitive Transcranial Magnetic Stimulation), this is a depression treatment for individuals who have not had a satisfactory response to medication, have had intolerable side effects, or are just seeking drug-free treatment. Approximately 30% to 50% of people with depression do not respond sufficiently to standard care. 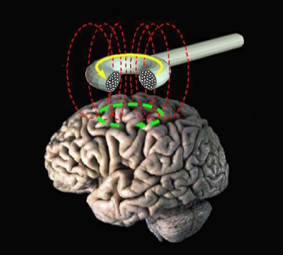 TMS uses magnetic energy to stimulate a part of the brain that regulates mood. A magnetic coil is used to send short magnetic pulses into the brain where they generate an electric current. The pulses pass easily and painlessly through the skull and into the brain.

Neurons are electrochemical brain cells that respond to electrical or chemical stimulation. TMS current causes a localized depolarization of neurons which elicits action potentials and then release of your own chemical neurotransmitters, neurotrophic growth factors and neuroendocrine substances.

Pulses administered in rapid succession are called repetitive TMS (rTMS). The area stimulated is called the pre-frontal cortex. This is where abnormal electrical activity is found in depressed patients. Repeated stimulation of this area normalizes neuronal circuits in the brain.

TMS was approved by the FDA in 2008 for patients with treatment-resistant depression. Since that time it has been used in clinical settings and research settings. It is currently in use at most major medical centers including Harvard, Stanford, Johns Hopkins, Duke, Yale, Brown, Columbia, NYU, Mayo Clinic, Cleveland Clinic and many more. TMS shows promise in the treatment of many other psychiatric and neurologic conditions. These include chronic pain, tinnitus, aphasia, Parkinson's disease, addiction, anxiety and panic disorders, OCD, eating disorders and schizophrenia. Research in these areas is robust.

TMS is performed without anesthesia or sedation and the patient can immediately resume their normal activities following the brief treatment. It is completely non-invasive. There are no needles or injections and there are no drugs that circulate in your system. Unlike deep vagal stimulation there are no implanted electrodes, and unlike ECT, there is no induced seizure and no subsequent confusion or memory loss. The pulses generated by the TMS coil are similar to those generated by magnetic resonance imaging (MRI) machines.

"TMS appears to re-set the system. But instead of jump-starting the entire brain, as ECT does, the magnetic therapy is much more targeted. That is undoubtedly why it is so well tolerated. This treatment provides a novel approach to the transformation of neural networks". 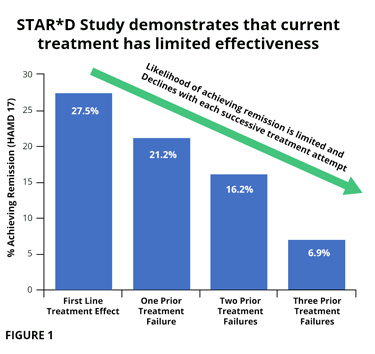 STAR*D Trial, one of our largest drug trials ever, was completed in 2006 and looked at response to antidepressant treatment in 4,000 patients around the country. It showed that the likelihood of achieving remission (depression fully treated) with an antidepressant was limited and declined with each subsequent trial (fig 1). At first trial 27.5% remitted, and by the fourth trial only 6.9% showed remission. By the fourth trial 41.4% had discontinued treatment due to systemic drug effects (fig 2). 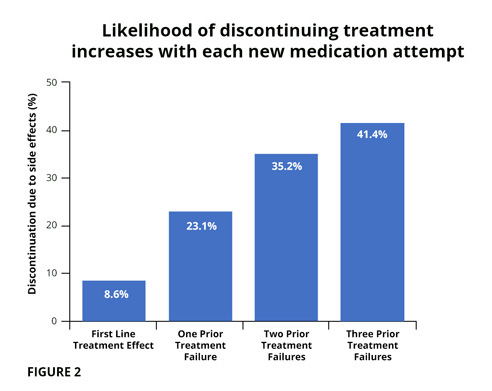 The overall cumulative remission rate by the 4th trial was 67%, leaving 33% with inadequate response (fig 3). 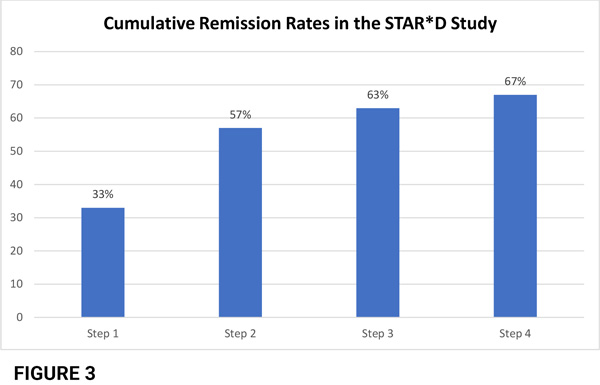 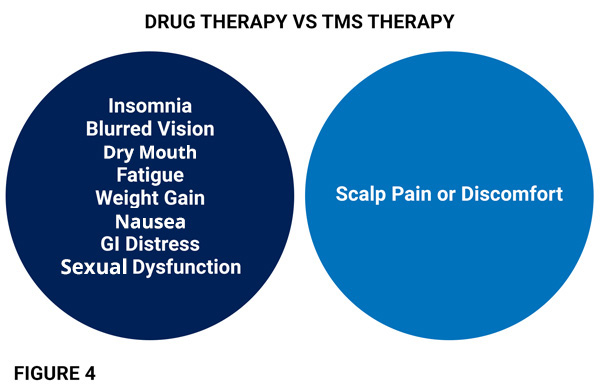 You will first have a psychiatric consultation with Dr. Haxton to determine your clinical eligibility for this treatment. In some instances, you may be asked to see your primary care doctor for a routine physical exam and labs.

Treatments will be performed by Dr. Haxton. A treatment session can be stopped at your request, at any time. 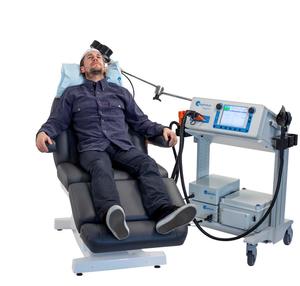 On the day of your first treatment you will be taken to a treatment room and will be asked to sit comfortably in a reclining chair. You will be given earplugs to wear during the treatment.

At the first treatment there will be an initial mapping procedure to determine the best location for the magnet. The magnetic dose appropriate for you will be determined by measuring your motor threshold. During the course of your treatment the amount of stimulation can be adjusted according to your symptoms and progress. 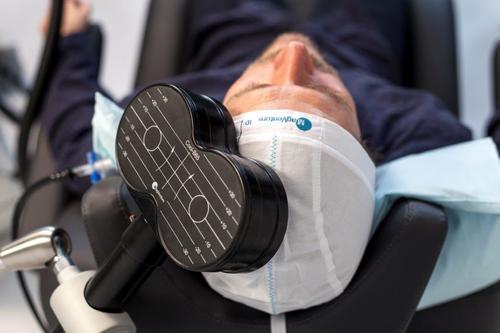 For all of your treatments the coil will be placed over your forehead. It will be switched on and off to produce the stimulating pulses. You may hear clicking sounds followed by pauses, and you may feel a tapping sensation on your head. The treatment takes 19 minutes.

You will be asked to fill out a brief Depression Rating Scale every week in order to monitor your progress.

Treatments are administered Monday through Friday -- five days per week, for four to six weeks.

Immediately following the treatment, you will be able to leave the office and resume your regular daily activities, including driving. You may experience a mild headache, tingling or pain in your scalp from the contractions of your scalp muscles during the procedure. These typically subside quickly and lessen over the course of the treatment.

You may be ineligible for TMS if you have any metal or implanted medical devices in your body. Non-removable magnetic sensitive metal in the head or within 12 inches of the coil is a strict contraindication. Examples include:

There are no known adverse effects on cognition (thinking and memory).

There are no long term adverse effects of TMS that are known at this time. As this is a relatively new treatment there could be unforeseen future risks. While this may be a good alternative to taking psychiatric medicine while pregnant, the risks to a developing baby during pregnancy are unknown. Women of childbearing age may be screened with a pregnancy test. There is a very small risk of seizure with TMS although none have been reported with the equipment used by Dr. Haxton.

TMS is a safe, effective and well-tolerated treatment for people with depression who have not been successful with standard treatment.

In some situations, patients may be advised to remain on their psychiatric medication throughout the treatment and after.

Patients vary both in their response time and in response quality. Some people feel relief from symptoms of depression in a few weeks; others not for 4-6 weeks. Some people have sustained improvement for more than two years and others require maintenance or booster treatments consisting of one or two treatment sessions.

In a study across 42 TMS clinics in the United States involving 264 patients, 58% of patients showed improvement of symptoms and 42% reported complete remission. At 12-month follow-up the outcomes were sustained.

Schedule a Visit
On the basis of an extensive diagnostic evaluation, Dr. Haxton will prescribe the most beneficial medication and treatment. Her goal is to relieve your suffering and to remove the obstacles to healthy and productive thinking and behavior.

For over 25 years Dr. Haxton has been helping her patients tell their stories and trace their paths.  By examining together the events in their lives and the actions taken, insight can be gained into the challenges that have followed. Engaged in an empathic and non-judgmental therapeutic relationship, patients learn how their choices and behaviors shape their lives. 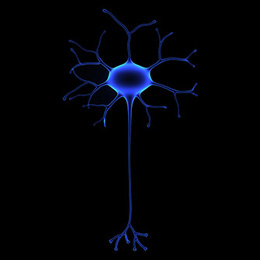